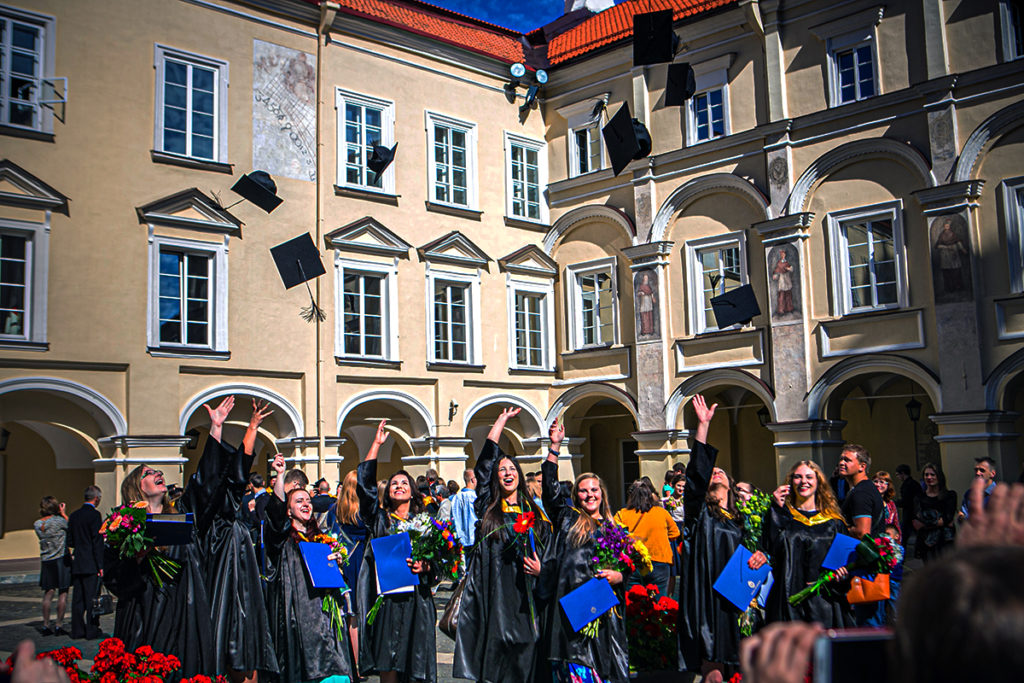 Have you ever had your Google Ad campaign rejected? It’s not only inconvenient when you’re trying to increase sales on your website, but it often takes time to find out why Google shut down your campaign.

What you’re about to read is a one-of-a-kind Snap SEO case study in which we assisted a replacement diploma business in getting its advertising campaign reinstated and increased its average conversion rate by 412%.

This case study is for you if you’ve ever struggled to get your advertisements off the ground. Please continue reading to find out how we accomplished it.

The client initially contacted us for assistance with their fully disapproved Google Ads account. Unfortunately, Google shut them down because they violated the “Enabling Dishonest Behaviour” policy. Although the business was not deceptive, it was simple to see why Google noticed their distinct offer.

They specialize in novelty diploma replacements for clients who have damaged or lost their original. Diplomas are also regularly bought as novelty presents or props for television or film productions. Unfortunately, Google wasn’t able to tell the difference.

Eventually, the client approached Google for assistance with their problem, and they were quoted a staggering $25,000 a month to fix it. That’s when they came to us for help in activating the ad account and optimizing their sponsored advertisements.

Our initial step was to do a thorough assessment of their Google Ads account and website. Next, we needed to figure out what was causing them to shut down.

While our primary aim was to activate their ad account, we also retrieved some data to see how their previous ads worked. These would serve as our future benchmarks.

When we started exploring, we discovered that over 90 advertisements had been denied for “Enabling Dishonest Behavior.” Take a look at the following examples: 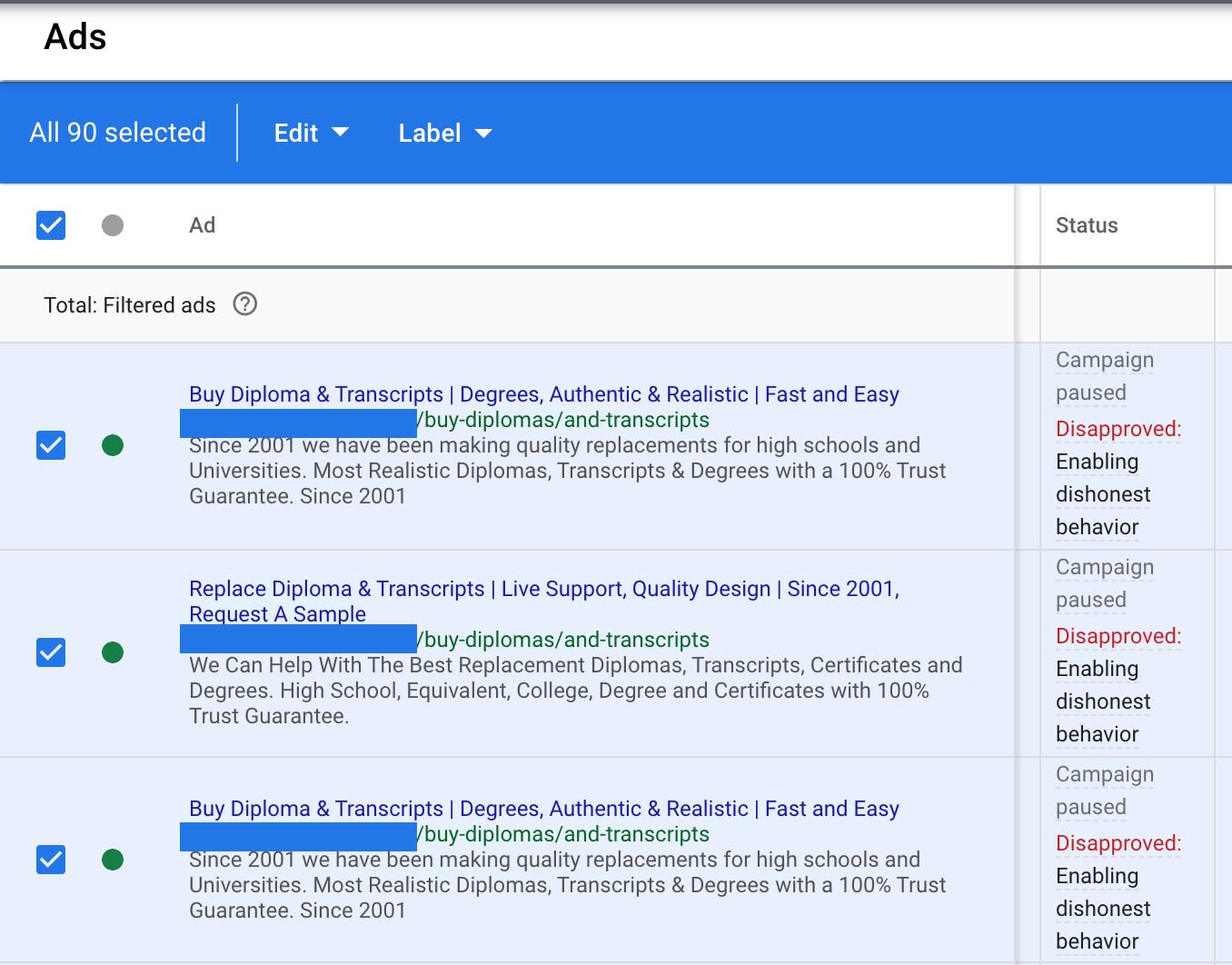 The next step was to sift through the client’s data. Before Google took down their account, they regarded their pay-per-click advertising as successful. Although their advertisements were finding momentum, we knew how to fine-tune them for unprecedented growth.

They had spent over $600,000 on 50+ ad campaigns before working with us. Their past performance was as follows:

These metrics seemed on point for your average e-commerce campaign. They didn’t seem far-fetched.

Our client got the highest conversion rates on their branded keywords, close to a 2.70 or 270 percent Return On Ad Spend (ROAS).

If you’ve seen any of our previous webinars, you’ll know that we always look through campaign parameters and account structure when we conduct audits.

While this campaign appeared to be in good shape, we discovered that Search Partners were enabled on all campaigns. These are websites that work with Google to display adverts and free product listings to broaden your reach throughout the web.

Look at the graph below to see how 44 of the 57 campaigns had Search Partners activated, and some even had Display Partners. 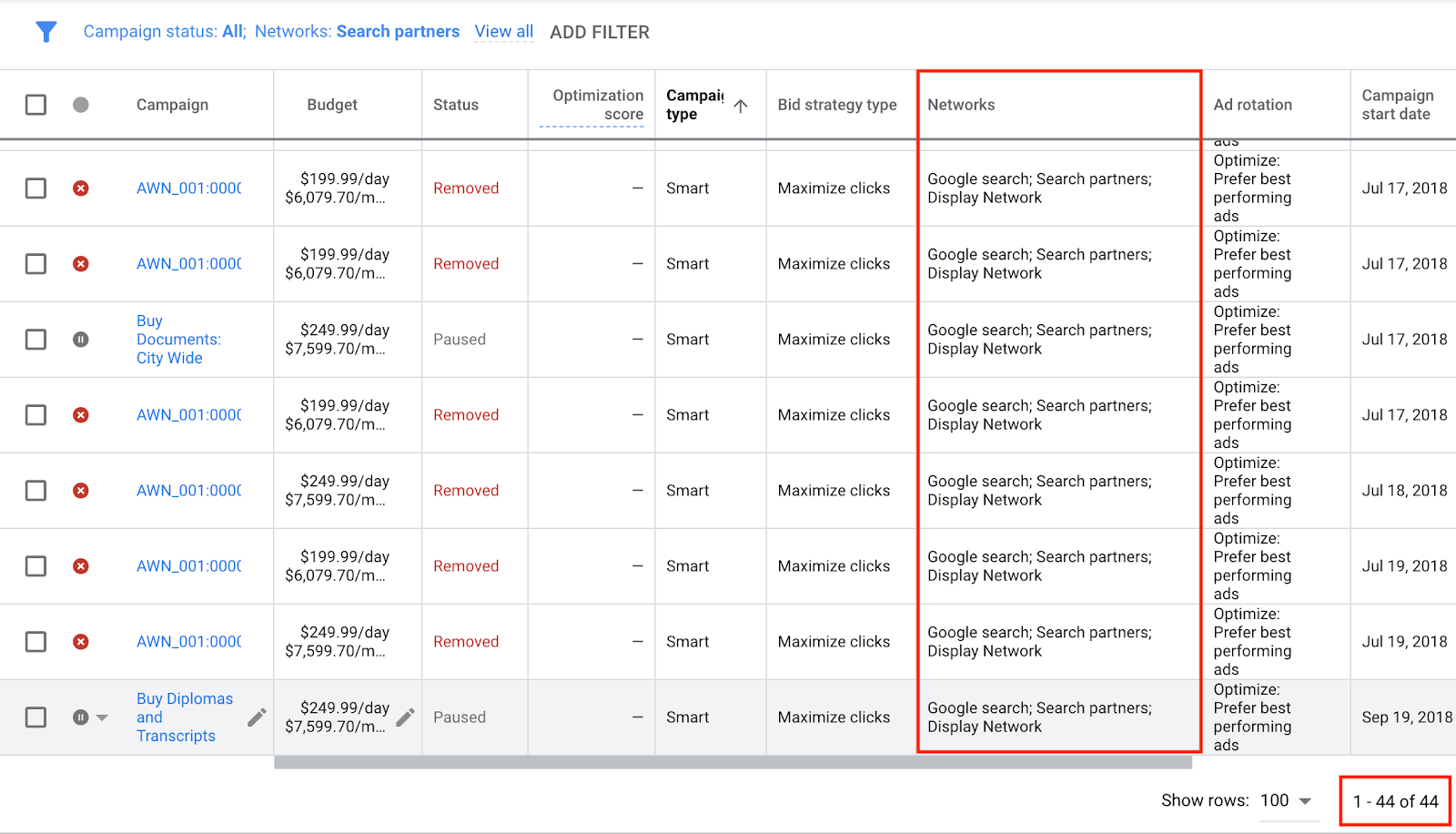 The truth is, Search and Display Partners often result in a reduced cost-per-click. The issue is that an advertiser receives less qualified traffic.

We understand why these two platforms would be appealing to any client. Google positions them as a method to save money while reaching out to thousands of potential clients.

The power of research has been lost. Your budget is now divided across platforms:

Even if you feel like you’re saving money, you’re spending more on low-quality traffic than you need to. This traffic is unlikely to convert at the levels you desire.

Let’s see how we activated their account and raised their conversion rate.

How We Fixed It

It is crucial to understand that it is not always possible to get your account back when your Google account is deactivated or suspended.

But, we couldn’t help them get more sales until everything was turned back on.

After evaluating the client’s website, our PPC team determined that they were not violating Google’s policies. Instead, there was a miscommunication between their ad wording and Google.

This client specializes in the production of novelty or replacement diplomas. While the customers recognize that these are entertaining imitations, Google crawled the advertisements and reported the client for selling genuine certificates.

We knew it was all a misunderstanding, so we took the standard approach and contacted Google Support directly. We sent them documentation demonstrating that the client only sold novelty diplomas in our standard review request.

It also included a screenshot of a Disclaimer Page we created for them and disclaimers that appear on each product page. 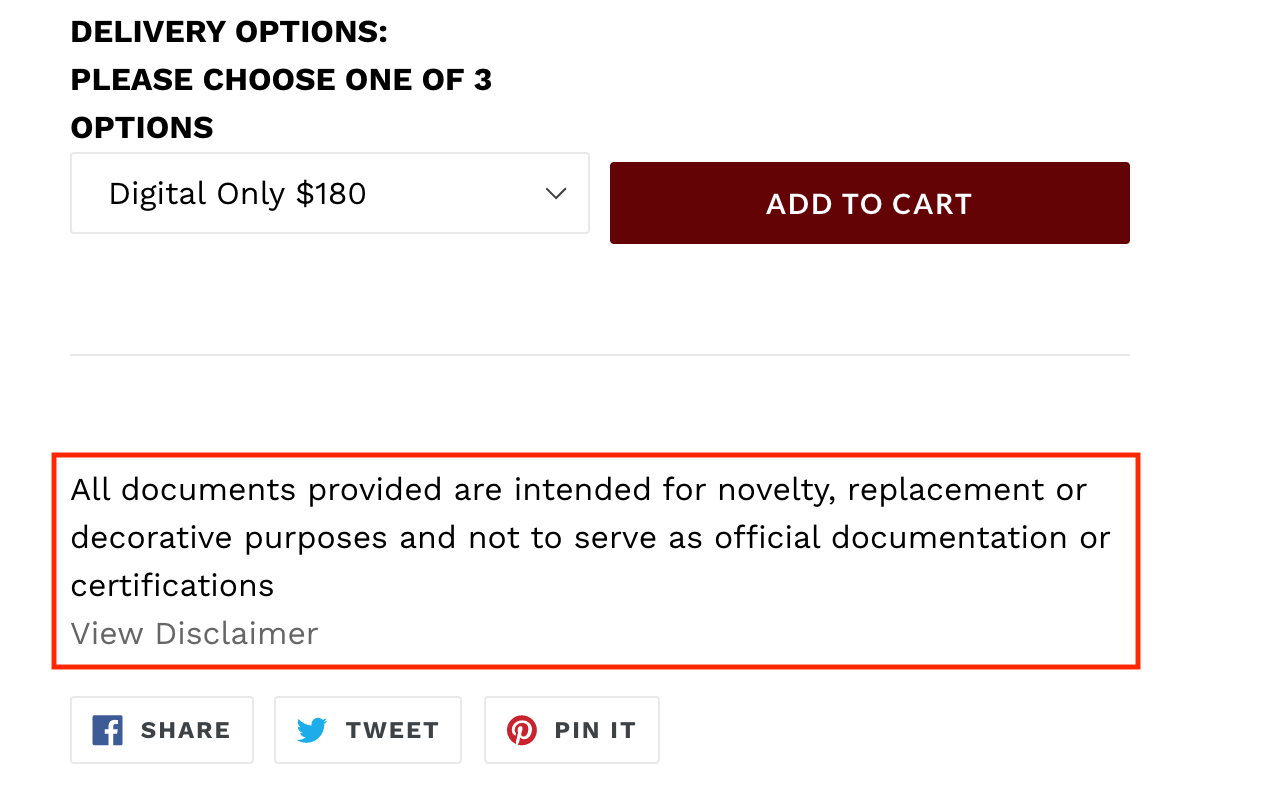 We received a reply from Google within a week, which was encouraging given that it can take up to 14 days for them to respond.

Their email wasn’t the best news, but it did provide us with some helpful information on how to resolve the problem.

Essentially, Google conducted an internal review of the client’s ads. They also appealed the ads in the account interface, but that was only partially successful.

Google discovered that the client’s ad copy mentioned diplomas being “realistic” and “authentic.” They claimed it was unclear whether the diplomas were novelty or replacements, which appeared to violate their policy against selling false documents.

That meant going back and removing any ad copy that mentioned the diplomas being “realistic” and “authentic.”

We got approved in the first round of review after editing the ad copy. Check out the differences between their disapproved and approved advertising below.

Now that everything was back up and running, we could concentrate on increasing their conversion rate.

Finding Qualified Traffic for our Client

As previously said, we want the most quality traffic for this client. So in a typical Snap SEO manner, we unchecked both the Search Partner and Display Partner options.

We chose to concentrate our efforts entirely on customers who use the formidable Google Search. So we have to start by optimizing their keywords to match their brand.

This client was very particular about attracting NEW customers or NEW users who had never heard of their organization.

To do this, we concentrated on high intent keywords such as “buy a diploma” and “buy a college credential.” Some of the branded keywords we utilized in their ads are listed below. 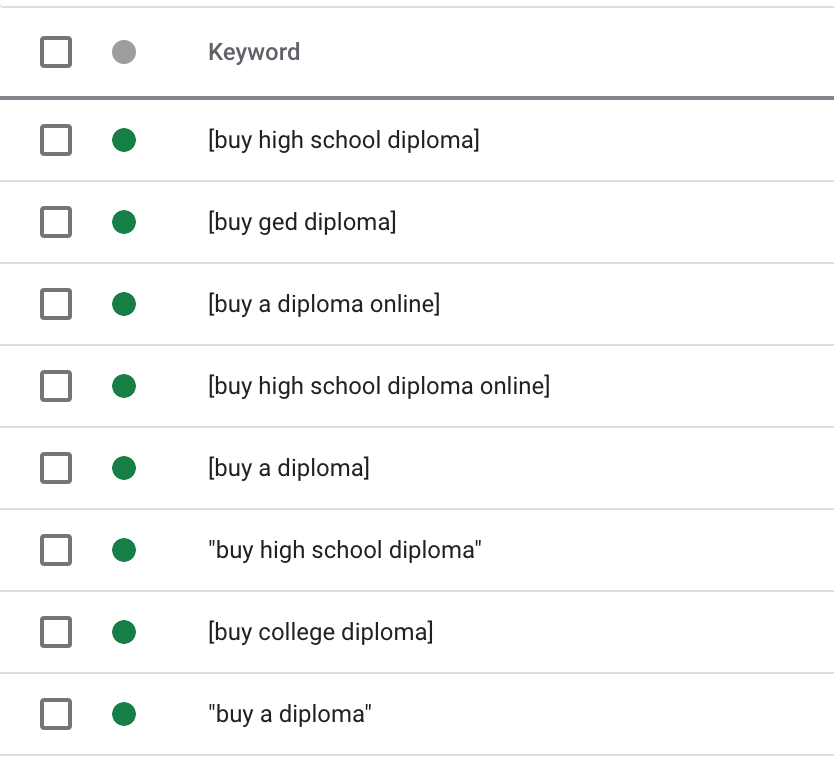 What effect will concentrating their advertisements and optimizing their keywords have on total traffic? It would attract new people searching for a particular solution to their present problem.

Although we limited the number of individuals who saw these advertisements, we knew that each ad would be delivered to those ready to purchase a novelty certificate.

How Did We Do?

Split testing of ads, locations, keywords, and site destinations was also part of our strategy.

We began by delivering visitors to the homepage for this client, which resulted in less-than-ideal outcomes in the first month.

More information on how their campaign was converted may be seen below.

After the first month, there was some movement, but nothing to brag about. Remember that properly optimizing a campaign takes some time.

Following that, we decided to redirect ad traffic from the client’s homepage to individual product pages. This simple change yielded remarkable results. Take a look at the examples below:

Despite the fact that the CPC nearly tripled after four months, our Snap PPC team outperformed the original branded ads. Their average conversion rate increased by 412%, from 1.96% to 10.03%.

And we did it all while bringing in new customers.

How so? We eliminated all irrelevant traffic sources, experimented with multiple destinations, and concentrated on high-intent keywords. As a result, we never go for the smallest cost-per-click.

You can understand why we thought this was such an intriguing case study to present. Our client came to us with a problem that might have cost him time and money. Their ad account had been deactivated, and they had no idea how to reactivate it.

One of the advantages of working with the Snap PPC is our expertise and knowledge of the Google Ads platform.

Get Started for Free!
format_quote

Snap SEO wrote some content for one of my earlier websites and together we’ve learned a lot in this business. I am very lucky to have such a skilled and attentive writer on hand at the drop of a hat. Their group can write on just about any topic you can imagine, and they really do know how to deliver content that please not only Google but also reads like a dream.

As someone who works with SEO every day it is such a pleasure to be able to rely on Snap’s team to provide insightful yet concise content for our clients’ needs, and always ready at any deadline we require. At first, I just thought we’d commission a few articles from Snap SEO but today we employ their services on a regular basis for all our content requirements. Cannot recommend them enough!

The guys at Snap SEO are true professionals and I thank my lucky stars every day that I contacted them to help with writing my website’s articles and sorting out other SEO issues. They were recommended by a friend and I can honestly say it is a pleasure to work with a team that deliver excellent work while taking my input seriously at the same time. 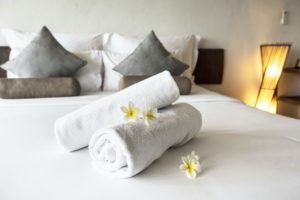 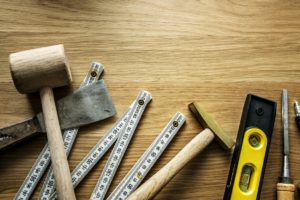